Rabat – The Republic of Suriname fully supports the territorial integrity of Morocco and reiterates its “unshakeable position regarding the Moroccanness of the Sahara and the sovereignty of Morocco over its southern provinces,” said, on Thursday in Rabat, Surinamese Minister of Foreign Affairs, International Trade and International Cooperation Albert Ramdin. 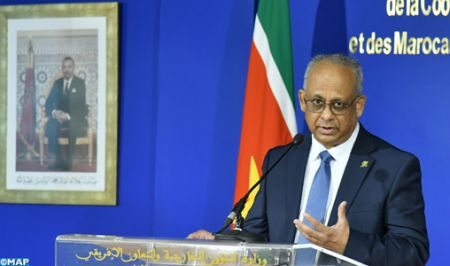 “The government of the Republic of Suriname supports the autonomy plan proposed by the Kingdom of Morocco as the sole basis for a lasting political solution to this dispute”, added the senior Surinamese official, who was speaking at a press briefing held at the end of his talks with Minister of Foreign Affairs, African Cooperation and Moroccans Abroad Nasser Bourita.

In addition, Ramdin noted that since July 28, 2004, date of the start of diplomatic relations between Morocco and Suriname, the partnership between the two countries has significantly evolved, adding that his talks with Bourita focused on different areas of cooperation.

“We decided to deepen the political dialogue, renew bilateral ties and share views on regional and multilateral cooperation,” he said, noting that this collaboration is an essential element of South-South cooperation, solidarity and mutual respect between the two countries.

For his part, Bourita thanked Suriname for its principled, stable and constructive position to defend this just cause by reaffirming its support for the territorial integrity of Morocco.