Success of Vaccination Campaign: A Proof of Morocco’s Ability to Meet Challenges (Head of Govt.)

Success of Vaccination Campaign: A Proof of Morocco’s Ability to Meet Challenges (Head of Govt.) 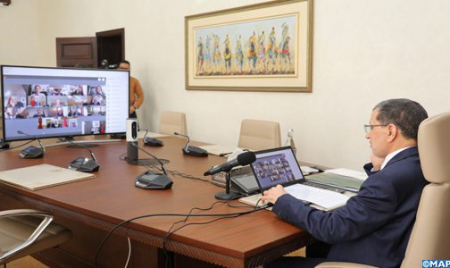 Speaking at the weekly meeting of the Government Council, held through video-conference, El Otmani noted that this initiative, which is carried out in a climate of national synergy and joint efforts, has been hailed by observers, including citizens, national and international media as well as world figures and authorities

In this regard, he pointed out the World Health Organization (WHO) which highlighted the campaign, congratulating the Kingdom for the progress it has made in this field.

Quoted in a statement read during a press briefing by Government Spokesman, Saaid Amzazi, El Otmani commended the progress made by the Kingdom, under the leadership of HM the King. He also thanked all sectors and regions that contributed to the success of this operation, headed by the Ministries of Health and Interior, as well as administrative and territorial services.

The Head of Government also noted that the prospects for crisis recovery at the global level are not yet clear, which requires continued compliance with precautionary measures that are up to now the most efficient prevention against the spread of Covid-19, pending the generalization of vaccination.