Rabat – President of the National Assembly of Sao Tome and Principe, Delfim Santiago Das Neves, reaffirmed, Wednesday in Rabat, the determination of his country to strengthen cooperation ties with Morocco, in the service of the interests of the two countries and peoples. 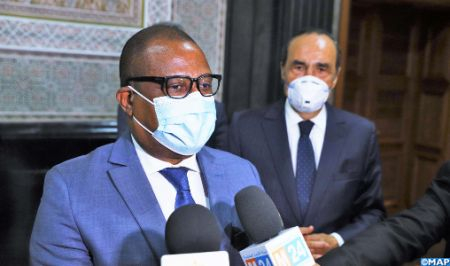 The Republic of Sao Tome and Principe is “strongly committed to further consolidate cooperation with the Kingdom of Morocco in various areas, notably at the political and diplomatic levels,” Santiago Das Neves told MAP after his talks with minister of Foreign Affairs, African Cooperation and Moroccan Expatriates, Nasser Bourita.

In this regard, the official lauded the excellent level of relations between the two countries, as evidenced by the recent opening of a consulate general in Laayoune and an embassy in Rabat, while reiterating the firm commitment of his country to strengthen the bonds of friendship and bilateral cooperation.

On Tuesday, president of the National Assembly of Sao Tome and Principe held talks with speaker of the House of Representatives, Habib El Malki, during which he reiterated the unwavering support of his country to the Moroccan Sahara and the firm commitment of this legislative institution in favor of the Kingdom to defend its national causes in various international forums.

He also expressed his willingness to further strengthen the ties of friendship and cooperation between the two States, especially as part of parliamentary diplomacy.