Rabat – The speaker of the House of Representatives Habib El Malki said, Friday in Rabat, that the regularity of the organization of the elections in Morocco consolidates the state of institutions and shows the stability of the democratic model of the Kingdom in a turbulent regional environment. 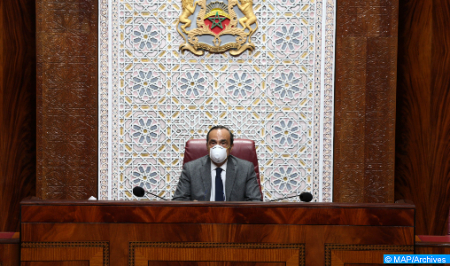 Speaking at the opening of the 2nd session of the 2020-2021 legislative year, El Malki welcomed the adoption of the texts relating to the elections scheduled for this year, which are able to consolidate the institutions and ensure the holding of these elections, despite this particular context.

The attention paid by HM King Mohammed VI and the various powers and political actors to the regularity of elections goes hand in hand with a collective desire to ensure transparency, credibility and probity, he said.

In addition, El Malki called for accelerating the pace of legislative action and solving the 229 legislative proposals presented, in order to promote the initiatives of members of the House, stressing that the projects undertaken by the Kingdom require exceptional mobilization and the capitalization of achievements.

He mentioned in this regard the new development model, which requires cooperation and complementarity of the various powers to ensure its success, adding that on the project of social protection, the House will be called upon to adopt the texts of the related framework law.

It also concerns the creation of the Mohammed VI Fund for investment, which will give new impetus and have a positive impact on employment and the promotion of the spirit of entrepreneurship, he noted.