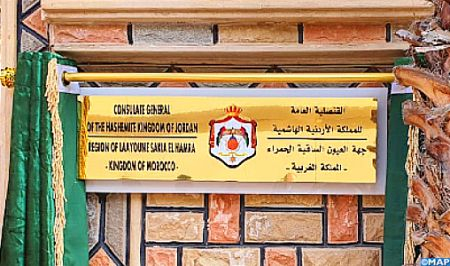 Jordanian Newspapers and news sites stressed that Amman’s move is a renewal of the country’s support to Morocco in the defense of its sovereignty over the Sahara and its territorial integrity.

Quoting Al-Safadi, the press wrote that the opening of the Hashemite Kingdom’s consulate is an endorsement of Jordan’s steadfast position defending Morocco’s territorial integrity and working with its brothers to reach a solution to the Moroccan Sahara issue, in line with the decisions of international legitimacy and the autonomy initiative launched by the Kingdom as the only logical solution to this conflict.

The Jordanian media has focused on the historical and strategic relations between the two kingdoms, which are reflected in permanent cooperation and uninterrupted coordination between the leaders and officials of the two countries.

The strategic cooperation between Rabat and Amman will contribute to achieving the development objectives of the two countries and to meeting all the common challenges facing the two brotherly peoples, several newspapers reported.

The presence of Jordan’s FM in Laayoune reflects the depth of relations between the two kingdoms, the same source added, noting that the visit of the head of Jordanian diplomacy also serves Arab interests.

The Hashemite Kingdom of Jordan opened on Thursday a consulate general in Laayoune, the 11th diplomatic representation inaugurated in the capital of the Moroccan Sahara just over a year ago.