Moroccan Sahara: European Recognition will Not Be Long (French MP)

Moroccan Sahara: European Recognition will Not Be Long (French MP)

Strasbourg – The European recognition of Morocco’s sovereignty over its Sahara will not be long, French MP Laurent Garcia said on Wednesday. 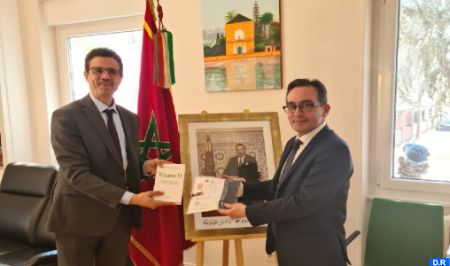 “The United States has taken a step ahead of the Europeans concerning the Moroccan Sahara. I think that the idea will gain ground in Europe in the light of our common past and our common, human and continental future,” said Garcia, also mayor of Laxou in Meurthe-et-Moselle during a meeting with the Consul General of Morocco in Strasbourg Driss El Kaissi.

The French deputy lauded the “role played by the Kingdom as a bridge between Europe and Africa”, emphasizing the excellent relations between Morocco and France, their common history and their “shared future to which we should give concrete substance”.

He welcomed on this occasion the actions undertaken by HM King Mohammed VI for the development of the Kingdom and on the international and regional scene.

Regarding relations with the European Union, the French MP said that Europe has every interest in continuing to maintain strong and respectful links with Morocco.

Garcia is a deputy affiliated with the Mouvement Démocrate (MoDem) group. He is also a member of the Commission for Cultural Affairs and Education and the Commission for the Modernization of Audiovisual Broadcasting at the French National Assembly.