Lebanese Army Expresses Thanks to HM the King

Lebanese Army Expresses Thanks to HM the King

Beirut – The Lebanese Armed Forces expressed their sincere thanks to HM King Mohammed VI for his laudable initiative to deliver food aid for the armed forces and the people of Lebanon. 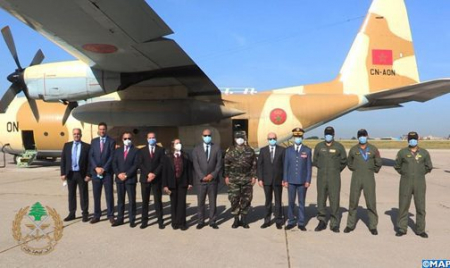 During the reception of the Royal Donation at Rafiq Hariri International Airport in Beirut, the representative of the Commander of the Lebanese Army, General Joseph Aoun, expressed the gratitude of the Lebanese Army to HM the King for his laudable initiative, the Lebanese News Agency said on Saturday.

He also expressed his wishes for peace to the Moroccan people and for progress and prosperity to the Kingdom of Morocco.

The first batch of food aid sent, upon the high instructions of HM King Mohammed VI, Supreme Commander and Chief of the General Staff of the Royal Armed Forces (FAR), to the armed forces and the Lebanese people, arrived Saturday morning on board two Moroccan military airplanes.

A total of 90 tonnes of basic food products will be carried by eight military planes.

This Royal decision takes place following a request made by the Lebanese side and is part of solidarity with this sister country, in order to enable it to face the economic challenges and repercussions of the Covid-19 pandemic.