Canberra – The former Australian Ambassador to Morocco Berenice Owen Jones received in Canberra, the Alawite Wissam of the Order of Commander which was awarded to her by His Majesty King Mohammed VI at the end of her diplomatic mission in the Kingdom. 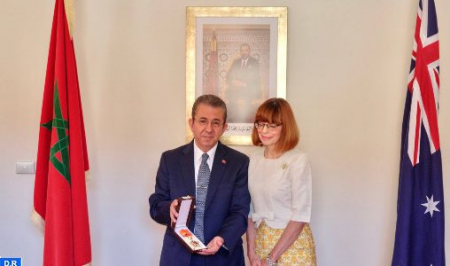 The Royal distinction was presented to the Australian diplomat by the Kingdom’s ambassador to Australia, Karim Medrek, during a ceremony attended notably by officials from the ministry of foreign affairs and trade, the Dean of Diplomatic Corps accredited in Canberra, and several personalities as well as members of her family.

Speaking on this occasion, Morocco’s Ambassador to Australia, Karim Medrek, stressed that this Royal distinction is a high recognition of the action and significant contribution of the Australian diplomat to the promotion of closer relations between Morocco and Australia.

This distinction is a strong symbol of the excellent ties between Morocco and Australia, he said.

For her part, Berenice Owen Jones expressed her deep gratitude to HM the King for awarding her this prestigious distinction and her pride to be the first resident ambassador of Australia to Morocco.

The Australian diplomat underscored that during her mission in Morocco, she witnessed the great achievements and economic progress made by the Kingdom, under the leadership of HM King Mohammed VI.