Rabat – Minister of Foreign Affairs, African Cooperation and Moroccans Abroad Nasser Bourita met, Wednesday in Rabat, with Executive Director of the United Nations Human Settlements Program (UN-Habitat) Maimunah Mohd Sharif, on the implementation of the new urban agenda and the Sustainable Development Goals (SDGs) in Morocco and around the world. 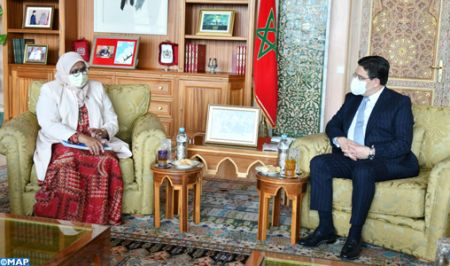 In a statement to the press, Sharif said that these talks focused on the action of UN-Habitat in Morocco, as well as on the means of carrying out the UN program to improve the quality of life of inhabitants.

The UN official, who is on a working visit to the Kingdom, said that this meeting also touched on the role that Morocco could play on the African continent in this area, as well as on the strengthening of joint action by the Kingdom and the UN-Habitat, welcoming in this regard the will of the Moroccan government to consolidate its partnership and cooperation with UN-Habitat.

Practical steps to be taken to give concrete substance to UN-Habitat programs on the ground and ways to shed light on the implementation of the new urban agenda and the SDGs were also discussed, she said.

The national office of UN-Habitat in Morocco was opened Monday at the headquarters of the Ministry of National Land Development, Urban Planning, Housing and City Policy.

This ceremony was also marked by the signing of the 2020-2023 UN-Habitat country program, a strategic framework that guides cooperation between the UN program and the Moroccan government.