Dakhla – The eminent member of the American Democratic Party, ex-diplomat and parliamentarian, Carol Moseley Braun, who is on a visit to Morocco, expressed on Thursday in Dakhla her admiration for the quality of the infrastructure and the potentialities boasted by the pearl of the South. 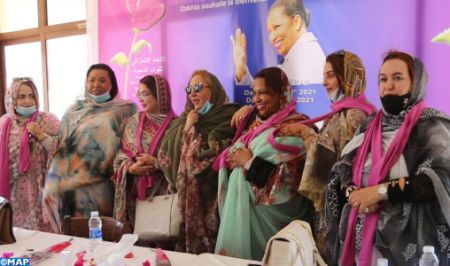 In a press statement, Braun, on a one-day visit to Dakhla at the invitation of the Socialist Union of Popular Forces (USFP) said she was impressed by the socio-economic development and the enormous potential of the Dakhla-Oued Eddahab region.

For his part, the member of the USFP political bureau El Mehdi Mezouri indicated that this visit, at the request of Braun of the American Democratic Party, aims to give information about the socio-economic development dynamics in Dakhla.

Braun is “an unofficial ambassador” who will relate all that she saw in Dakhla, Mezouri said, recalling that she is a member of the US Democratic Party of President Joe Biden.

Similarly, he said that this trip is likely to further strengthen the links between the USFP and the American Democratic Party, in the service of the first national cause, namely the issue of territorial integrity, adding that the two parties share several common values.

During this trip, Braun visited the premises of the future US Consulate General in Dakhla, the small museum of Saharan Morocco, the craft complex and the port.