By Opening its Consulate in Laayoune, Jordan Is Giving Significant Support to Autonomy Initiative in Sahara – Chilean News Site

By Opening its Consulate in Laayoune, Jordan Is Giving Significant Support to Autonomy Initiative in Sahara – Chilean News Site

Santiago – Jordan’s decision to open a Consulate General in Laayoune is an indication of the significant support for Morocco and a major endorsement of the autonomy initiative in the Sahara under Moroccan sovereignty, writes Chilean news site “El Periodista Online.” 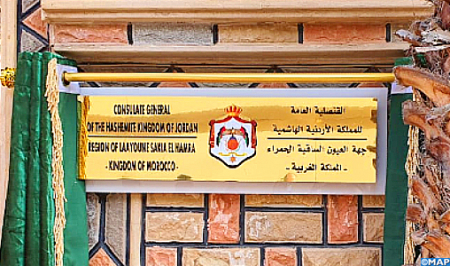 The Jordanian decision, announced last November by Hashemite ruler King Abdullah II, is the latest from a host of countries that have expressed their support for the Kingdom’s sovereignty over its Sahara, notes the online publication, while recalling the U.S. recognition of Morocco’s sovereignty over this territory and the fact that the autonomy initiative is the “only solution to this artificial dispute” over the Sahara.

According to the same source, Amman’s decision also consolidates the Arab bloc in the face of crucial issues and is a reflection of the solid deep-rooted historic relations between the two brotherly countries.

“The consolidation of Morocco’s sovereignty over this territory is likely to accelerate the development of all regions of the country and thus promote prosperity, progress and development of the populations of these regions.”

The Jordanian consulate general is the 11th diplomatic representation inaugurated in Laayoune in less than a year. Other consulates are already established in Dakhla.