African Union: Morocco Believes that Renewal of AU Structures is Going in the Right Direction (FM)

African Union: Morocco Believes that Renewal of AU Structures is Going in the Right Direction (FM)

Rabat – The Kingdom of Morocco believes that the renewal of the structures of the African Union (AU) is going in the right direction, said Sunday in Rabat minister of Foreign Affairs, African cooperation and Moroccans Abroad, Nasser Bourita. 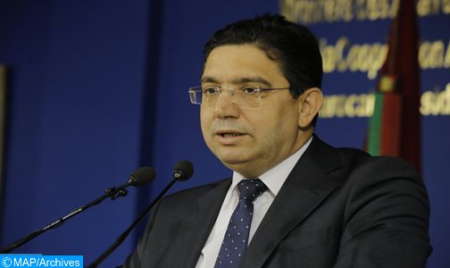 Speaking at a press conference on the occasion of the 34th Ordinary Session of the African Union (AU) Assembly, which was marked by the election and renewal of the structures of the Union, Bourita said that Morocco considers that this renewal is going in the right direction as it will promote more professionalism and further strengthen the ethics of the African Union’s action.

This renewal will allow the AU to free itself from the commissioners who have used the African Organization to serve an agenda far from that of the Union and which serves neither the decisions of the Organization, nor the interests of Africa, the minister underlined.

His Majesty the King had indicated, in His last Speech on the occasion of the Green March, that there is an exploitation of the Organization by some of its officials in order to interfere in matters which had no relationship with Africa, thus considering it as a “diplomatic annex” in the service of some countries, he added.

Bourita underlined that the Kingdom of Morocco seeks to win one of the remaining commissioner posts, in particular those for Health and Education, adding that Morocco will present its candidacies and will work to be part of the next team of commissioners.

The minister also expressed Morocco’s satisfaction with the results of the 34th Ordinary Session of the AU Assembly, with regards to its national cause, institutional reform, and efforts of African countries to fight against the COVID-19 pandemic.